The iPhone 7 is coming your way this Sept 2016.  As with previous Apple product releases, the iPhone 7 is the subject of endless rumors and photo leaks. Here are the most recent photo and video leaks of the past few weeks. We can use these leaks to shed some light on what to expect from the new iPhone 7.

The most dramatic change still in play is the addition of a “Pro” model similar to the iPad Pro.  Multiple sources say Apple may soon include an iPhone 7 Plus and iPhone 7 Pro.  Leaked photos first surfaced in July 2016 on Nowhereelse.fr; show three models. More recent rumors have led us to believe that Apple will probably stick with only two models.

The outside of the iPhone 7 will look a lot like the iPhone 6/6S and 6/6S Plus. This really shouldn't come as a big surprise to anyone.

One prediction is that Apple will be ditching the 3.5mm headphone jack in its next flagship.  Many prospective buyers are upset by the idea that Apple is abandoning the headphone jack in favor of their own proprietary headphones.  New images leaks showing off a Lightning-to-3.5mm adapter suggest the rumor true.  This is unfortunate for wired headphone lovers like myself.

New evidence suggests that Apple is hiding behind a shell corporation as it seeks ownership of a new trademark named “AirPods,” Could this be the name for a new set of Bluetooth wireless earbuds? A Delaware company Entertainment in Flight LLC, filed for an amendment to its existing “AirPods” trademark filing.  These wireless earphones will likely be sold as an alternative to the standard ear buds we’ve grown to despise. Traditional Bluetooth headphones have a wire connecting the left and right earpieces to each other.  The “AirPods” will not include a connective cord between the earpieces.

The headphones are similar in design to the Bragi Dash upcoming earphones that feature individual ear pieces for each ear. The wireless earphones, have a battery life of four hours and each contain their own separate batteries.  The headphones charge through a carrying case that serves as a rechargeable battery to extend their usage.

Abandoning the headphone jack would could leave room for 2 speaker grilles, which appeared on this leaked photo. That would allow the iPhone 7 to utilize true stereo sound. 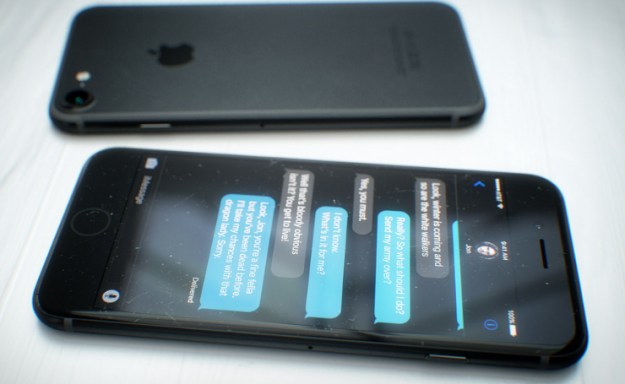 Reports indicate the iPhone 7 is getting a home button makeover.  Cowen and Company are predicting the iPhone 7 would have a “Force Touch” home button. Force Touch technology was developed by Apple Inc. in 2008.  Force Touch is a pressure sensitive multi-touch technology that enables trackpads and touchscreens to distinguish between different levels of force being applied to their surfaces. Business Insider reports, Apple will use its ‘Force Touch’ technology and a motor inside the iPhone 7. This provides the sensation the button is being physically depressed.”

Steve Hemmerstoffer, reports the iPhone 7 battery is getting a 14 percent bump in capacity. What Does that mean?  About an hour and a half more battery than the iPhone 6s.

The iPhone 7 may have full waterproofing capabilities.  This is just a guess with the no headphone jack.  The iPhone 7 will support up to 256GB of storage space.  The firm Trendforce predicts the iPhone 7 will get a memory boost of 3GB in the 5.5-inch model. The Chinese shopping site Weibo posted prices for three iPhone 7 models, with storage tiers starting at 32GB.  The Wall Street Journal confirms this.  Come this September we will see for ourselves.

We're not around right now. But you can send us an email and we'll get back to you, asap.